Men of a Certain Age
In my genealogical climb through the branches and tangled vines of my family tree, I have discovered photographs of a lot of hairy men—beards down to the belt buckle, mutton chop sideburns, pomaded pompadours. But, the moustaches tend to show up in photos of family men around the 1920’s No matter what state they lived in, or even what country, moustaches dominated early 20th century male fashion.

The   photograph of Walter Lugrin Sr  (1878-1940) shows a man who is meticulous in details of dress. He wears a stick pin in his carefully knotted tie, a white handkerchief in the pocket of his expensive-looking suit. The moustache is bushy but neat, somewhat between a chevron and a paintbrush (American Moustache Institute). I wouldn’t expect less than thoughtful, measured care in the looks of a watchmaker and businessman who worked for  the  A. Wittnauer Co in Manhattan.  Married to my great-aunt Hattie Edwards, Walter was a family favorite who had gotten jobs in the jewelry store for Hattie and three of her sisters. 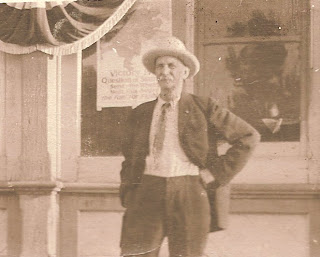 Edward John Scott (1857-1925) also sported a moustache although we have no photos of him as a young man. He too was a “company man” who worked for the same employer for over 20 years, as a printer in New Mexico for the Las Vegas Optic newspaper.  This photo (around 1918) shows a more casual  approach to dress. appropriate for the West. Hand cocked on hip, jacket thrown open, topped with a straw hat to keep off the New Mexico sun, E. J. Scott wears a bushy moustache too, not quite as contained as Walter’s but nevertheless in the “chevron” mode.  His expression is less business-like, less imposing than that of Uncle Walter back in New Jersey E. J. is often shown with that same affable smile in photos with his grandchildren, including my father, another Edward Scott.

Frederick William Stanley York (1876-1968) was from the Canadian branch of the family.  His mother Catherine was a first cousin of E. J. Scott’s wife Selina Jane, whose parents had immigrated to the American Midwest in the 1860’s from Ontario.  Stanley and several siblings moved west from Ontario to Manitoba and Alberta in the late 1880’s.  Stanley’s photo shows a young man of ramrod posture, eyes staring directly into the camera, high collar and white tie.  Although not as bushy as E.J.’s moustache,   Stanley York’s bristles add a good two inches to each side, a much truer chevron. This photograph  was probably taken around 1898, about the time he traveled with a group from the Churches of Christ congregation of Carman, Manitoba, all the way to Nashville for training at the Bible School.  From  photos of his horses and chickens, I know he farmed in Alberta with his wife Ella. They lived long enough to celebrate their 50th wedding anniversary in 1953. The moustache was long gone.

Go back one generation from Walter, E.J. and Stanley and you’ll find that men of a certain age—staid, married men—wore beards. But, the beard only really came into fashion in the United States in the 1850’s after several decades of a vogue of clean-shaven faces.
By 1920, the beard went out of style again, replaced by either a moustache or goatee, no doubt influenced by Gillette’s invention of the safety razor which became standard-issue gear for U.S soldiers in World War I (source: “Safety Razors”). As fashionista Heidi Klum might say, “Bristles. One week they’re in, one week they’re out.”

*Please note that Carol was very late in finishing her essay today, and Megan's essay reflects that fact.


Megan:
The many uses of Bristles
Yesterday, on the way to the movies,  Mom and I had a conversation about this topic. Conversation is probably not the right word. I tried to guess what she was going to write about and she wouldn’t tell me.

“Bella has bristles on her chin” she suggested.
“Those are whiskers. Are you going to write about facial hair?"
“I’m not sure how much I have to say about that,” she said, stroking the whiskers on her own chin.
“This morning,” I offered,  “I found this long curly black hair growing right out of the side of my face.”

She finished choking just as we arrived at the movie theater and saw the worst movie of the year – One Day. It was so bad. Also, it had the same premise as a story I’ve been working on which follows a character (me) on the same day each year. I was going to use my journals. I’ve put a lot of hours into this project, not to mention the ten years that had to pass in order for me to accumulate the entries. I’m not sure it’s going to work – it’s more of an exercise, but I can assure you that the unedited and angsty journaling from my late teens is still much more interesting than that movie we saw yesterday.

I guess the fact that the movie was bad is a good thing. It’s worse when you come up with an idea and then someone else has beat you to it and theirs is better. At least I have a chance to improve it.

Anyway, I’m not doing too well with this topic today. I keep wanting to add that my mother did not finish her essay because she had obligations this morning, obligations she has known about for a while – so she could totally have written the essay before. But I skipped out all last week, and I knew about Kelly’s visit for months. So, I don’t have any right to be annoyed. Except, have you ever noticed that getting annoyed at something is not a logical reaction anyway, it happens whether you have been rightly wronged or not? Still, when I write and she doesn’t, I bristle with annoyance.

The next topic will be "Traveling and Arriving."

This is our picture

We are a retired college professor and an unemployed librarian. Also, mother and daughter.